Q: Can I file a Writ In Rem in Kuala Lumpur and have the ship arrested in Kota Kinabalu?

A: Yes. This is because Section 7(2) of the Courts Judicature Act 1964 (“CJA 1964”) allows any writ and warrant issued within the High Court Malaya be executed or served anywhere in Malaysia. This would include Sabah and Sarawak. 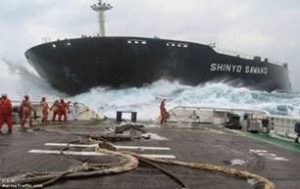 A: A Writ In Rem is a legal document that invoke the admiralty jurisdiction of the High Court against “the thing” or “res” in dispute. The thing or res is usually a ship. A Writ In Rem can be distinguished from a normal writ which is issued against a person or body of person. This is also known as a Writ In Personam. A Writ in Rem may be issued even when the res is outside the territorial jurisdiction of the court. It can then be served when the res eventually comes within the court’s territorial jurisdiction.

Q: How can I invoke the admiralty jurisdiction of the High Court?

A: Admiralty jurisdiction of the High Court may be invoked if the criteria set out in Sections 20 and 21 of the UK Seniors Court Act 1981 (“SCA 1981”) are fulfilled.

Q: My company has failed to pay the loans of the bank in respect of a ship mortgaged to the bank. Can the bank arrest the ship of my company?

A: Yes. Mortgage or charge on a ship falls within the category in Section 20(2)(c) of the SCA 1981. Admiralty jurisdiction of the High Court may be invoked.

Q: What if my company has sold the ship to a new buyer. Can the bank still pursue the claim against the res i.e. the ship?

A: Yes. Mortgage claim falls within the category where an action in rem may be brought against the res in connection with the mortgage. Unlike in a situation of cargo damage claim (which is explained in our previous legal update), the bank does not have to show the owner is liable in personam to pay the loan. Hence, even if the owner of the vessel has changed, an action in rem can still be brought against the res i.e. the ship.

What is specific relief? How can properties be recovered under the rule of equity? Part 1: Recovery possession of Immovable property